Hey everyone, Gage & Zac here coming at you live for a Shenanijam review!

Before I even begin I’d like to thank everyone who was able to show up and experience the jam. It was an amazing experience and I can’t wait to do more with you. This last weekend the JDE folks participated in the Shenanijam, a Game Jam hosted by Butterscotch Shenanigans, and it was a blast! The turn out on participants was great and it ranged from raising sophomores to alumni, and everything in between.  Looking back, I was really inspired by the amount of people who participated. Around twenty people, broken up into six teams, were able to create games (and directly after finals)! It’s wonderful seeing so many people who are willing to take the initiative with game development. 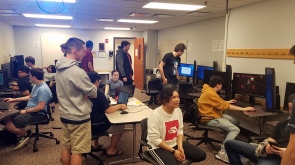 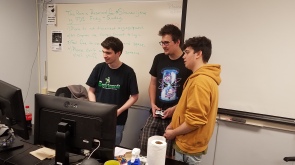 This time around we had the choice to choose any or combine any of the prompts which were: void sandwich, sticky justice, and burn it down. One of our teams chose void sandwich, and we went for a food truck parked next to a black hole. They had a blast playing around with Vector math to simulate the gravitational force of a black hole. The best part was how their own personal constraint or making every function used a void function. It was a great time to see what folks could make after having finals just a few days before.

Besides that, one of everyone’s favorite moments was when they took a moment from their development cycle to play a simple story telling card game, Confabula Rasa. It really helped lessen the stress and clear our heads a bit. Our major challenge was working around the building hours and how the room gets musty with body odor, but besides that we prevailed! Towards the end of the jam we had an amazing playtest session and bundle submission for the Shenanijam. Since the submission we have received tons of positive comments and feedback for our bundle.

The overall experience was super positive and fun. We learned a lot about the design process as well as those of whom we worked with. Some of us also learned to bring some fans next time… and maybe some group pizza… Be sure to join us next time during our next Game Jam. Thanks for reading!